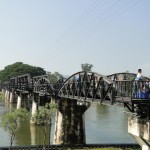 Onwards from Bangkok and we took a 3 hour noisy and bumpy train ride to a town called Kanchanaburi.
This is the town with the infamous Bridge Over the River Kwai, (* – The bridge is neither the one seen in the film of the same name, it was filmed in Sri Lanka, or indeed does it go over the River Kwai, it is actually the Mae Khlong river). Nevertheless, seeing the town, bridge and history associated is worth a visit.  The bridge still has some of the original arches, the squarer ones were the ones replaced after some Allied bombing. 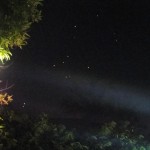 Kanchanaburi was in full moon mode with hundreds of lanterns being flown and many loud fireworks going off at night which took away from a slightly seedy side to the town.
We stayed at a guesthouse on the river called Pong Phen, that did very good and spicy food, a nice room and swimming pool. 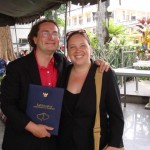 It’s amazing what five weeks in tropical paradises does to clear the mind. After fourteen years of living in sin, Chloe suddenly decided she would ask Allan to marry her. Happily, and despite numerous get-outs being offered, he said yes.

Dear reader, please dispel from your mind any notion of romantic ceremonies on palm-fringed beaches, of bright flowers and silk draped elephants. Picture instead three days of Bangkok government offices, queues, translations, forms, passports, checks (‘Really? You have been living together for FOURTEEN years?’) and rubber stamps.

It’s really not important how, though, just that we have. 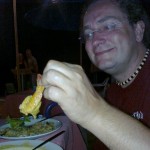 Now, ladies and gentleman. I, Allan, must start with the fact that I like my food as per the project manager’s paunch that seems to be a permanent feature. But, Thailand, and particularly the beachside seafood restaurants of Nai Yang take the biscuit.

For 9 days in Phuket I ate the freshest possible seafood sitting in chairs sinking ever so deeper into the sand. I only tried the “normal” prawns for 200BT (£4) for over 10 of the enormous decapods in a lovely spicy curry sauce. And this wasn’t even the so called King Prawns that were for sale. 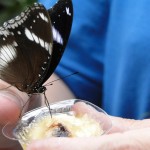 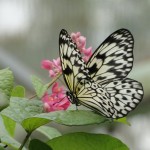 After one aborted trip around Phuket town yesterday due to the very heavy rain, we went back and went to see a butterfly and insect zoo incorporating, for no good reason, a pond of massive fish. Having taken our first tuk-tuk, at inflated price of 200B return, we arrived at what can only be described as a nirvana for butterflies.

Having skirted around the insect nation including some pretty large and docile tarantulas we went into the butterfly section. The butterflies here seem to have it good. Not only are visitors suckered into spending 20BT (40p) on fish and butterfly food, they seem to have lots of food hanging around, all the space to flutter in their 4-winged way and there’s even a protected nursery for the young ‘uns 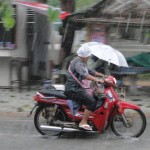 After the zoo and to try to avoid even more rain, we then went to a very odd little museum in a hotel in town (Thavorn Hotel). It had some very odd items; everything from a 200 year old rice pot, lots of signed Thai B-movie posters and even an original 1940s cinema projector which I’m sure somewhere like the BFI would kill for. Well worth a visit. 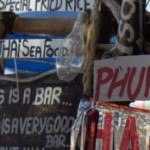 If you were unaware what had happened here nearly seven years ago, you would be forgiven for thinking Nai Yang was a ramshackle little village, in the shadow of some luxury resorts, taking its opportunity to pull in some of the tourist trade travelling south from Phuket airport. But there’s too much new and thrown together building here for it to be simply evidence of a growth spurt.

On 26 December 2004, the tsunami travelled 300 metres inland from Nai Yang beach. People lost their homes and their livelihoods. Although comparatively few people died in Nai Yang itself, some lost family in other parts of Thailand.

The beach bar we visited tonight is run by eccentric Mr Kobi, who has thrown up signs, photos and graffiti from the road to the beachfront. In amongst sarcastic comments (‘I love you long time’) and pictures of customers, we came across a section about the tsunami. Some of the photos were of Nai Yang beach just as the wave hit and showing the aftermath, others were images from other parts of Thailand (he seems to have lost family in Kho Phi Phi). They were surrounded by phrases in English, such as ‘This my friend, I live he die’ and ‘People die, die, die’. He also has photos of the makeshift bar he opened two days later. Together they create a vivid and disturbing collage of his life torn apart and rebuilt.

We have not seen or heard the tsunami mentioned anywhere else since arriving.

I don’t blame people for wanting to move on. It’s always possible that this is a cynical ploy to persuade people to spend more at his bar, but I don’t think so. He needed, and perhaps still needs, to buck the trend by remembering, marking (he serves a Tsunami cocktail, which only someone who was there could possibly get away with) and showing visitors what happened on Boxing Day 2004. 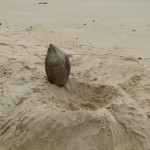 During a break from the cycling, we sat on the beach watching the mad white crabs scuttling away wherever we walked and planes landing/taking off from the very nearby Phuket airport. Could almost see the faces of the people in the planes, it was that close. 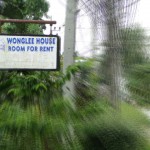 For some reason, whilst Chloe and Allan were cycling along – yes, you heard that right, Chloe cycling – Allan was reminded of an old boss of his when seeing a particular guesthouse sign.

Hi Wongle and all at the Agency, hope everything is going as well as expected in the new building for you guys. 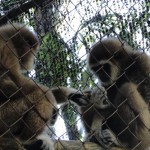 We managed to get our backsides off the beach today for long enough to visit the Gibbon Rehabilitation Project in Khao Phra Thaew Royal Wildlife and Forest Reserve.

As soon as we stepped out of the taxi, we could hear the song of the gibbon. It was incredible: haunting, sad and like nothing we had ever heard before.

Before it became too hot, we made the 20 minute climb to Bang Pae waterfall, the highest in Phuket. The shady, damp forest around us kept the worst of the sun off and the odd butterfly (in red, orange and yellow) flitted across our path. There were plenty of other people about (in fact it was the first place we’ve seen with lots of Thai visitors) but it didn’t stop the winding, stepped path and the gorge itself from being immensely peaceful.

The gibbon centre lies at the bottom of the waterfall path. It is a very straightforward affair. Its aim is to rescue abused gibbons from all over Thailand and raise the funds it needs to keep operating.

The first thing you notice about the gibbons is their arms, which reach to their ankles when fully upright (if they have ankles). This, coupled with their long, delicate fingers, makes them supremely fit to move through branches with grace and speed.

Gibbons unable to survive in the wild remain at the sanctuary. Some are too ‘humanised’, others suffer from trauma and eating disorders, and some have lost fingers and limbs as a result of ill treatment. 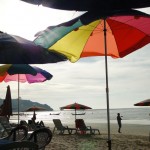 We planned to arrive into Phuket in order to travel through southern and central Thailand on the way to Chiang Mai in the north. With the recent flooding affecting vast parts of the country, we’re going to have to be a bit flexible.

The plan was not much longer than a day or so in Phuket as guidebooks indicated very busy, expensive resorts with some very “interesting” bars. But then we have found a found a lovely little guesthouse called Pen Siri that is charging us 600BT (around £12) in Nai Yang that is air conditioned, 500m from a great 6km long beach and with loads of very good seafood places. Looks like we may be here for some time as Allan needs to try every king prawn dish on every menu.

Pen Siri’s contact details are 0818959489 (next door to the indigo pearl resort) if you want a affordable and friendly place. 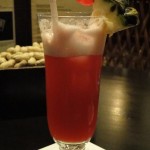 One night in Singapore. There’s really only one thing we can do. Get ourselves to Raffles for a Singapore Sling!

Our neighbour, Robert, spent time in Singapore as a child and later in life. He told us of the Long Bar at Raffles and, eyes misting over with remembered joys, of the curry puffs they served there. So we were excited to taste this legendary treat

But the world marches on and Raffles decided to ‘modernise’ its bar menu. They stopped serving curry puffs just one month ago. The exquisite snack was snatched from our mouths before we could even smell, let alone taste, it. In their place are nachos and other world foods.

It was a sad discovery. But we were not yet foiled. We told the man in Raffles’ shop about our quest for curry puffs and why we were so keen to try them. He helped us search for a recipe. Although we were unable to find the original Raffles version, he photocopied a recipe from a Singaporean cookery book for us.

Robert, when we return, we have some experimenting to do…

From our brief encounter so far, we like Singapore – it is full of life but extremely organised (which after four weeks in Bali is quite soothing).