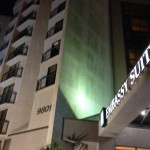 Welcome to Gallifrey One. It’s the world’s longest running and most fun Doctor Who convention. So why not travel a third of the way round the planet to attend? For three days? Lots of very logical reasons to do with jet lag and time zones it turns out but – circadian rhythms be damned! – we need three days of Frazer Hines, incredible outfits and John Barrowman being ‘unexpectedly’ outrageous.

Friday. Day One. We discover Allan forgot his camera charger. All is well, though, it will last long enough to capture some of the most stunning outfits and I have mine too.

Saturday. Day Two. We discover Allan forgot the memory card reader. All posts will now be accompanied by photos taken on our phones or borrowed from Twitter. FFS. 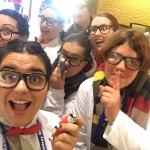 Our first 24 hours has included: a chat with the lovely Eve Myles who refused to confirm or deny whether it was her what done it in Broadchurch; finding out how much the bosses of the SyFy Channel really do not like scifi; a panel which descended, very entertainingly, into a competition about who hated which Christmas Special most; one of those perspective flips that made me wonder (for about 10 mins) whether Clara was being abusive towards the Doctor through Series 8; Danny Hargreaves, the King of Physical FX, talked us through his favourite explosions and stuff he’s set on fire, on purpose (a hangar in Wales) and by mistake (David Tennant); and he joined the very charming and polite (yes, it turns out she was just acting Courtney) Ellis George for a live commentary for Kill the Moon. 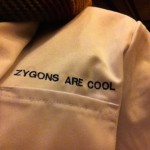 Finally, in a scene reminiscent of Hitchcock’s ‘The Birds’, an innocent pair of Osgoods hanging around in the lobby quickly became a slightly terrifying pack of twenty.

Cries of ‘Which one is the Zygon?’ and “Osgood lives!’ will haunt many convention-goers for years. Full disclosure: one of those Osgoods was me. And I was the Zygon. I think.