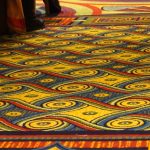 Even through a fog of jet lag, Gallifrey One is a marvellous thing. In our seventh year, it’s a mix of fondly familiar (yes, the carpet is still there despite the lobby refurb) and happily surprising (no, we wouldn’t have bet on Steven Moffat being sociable, gregarious and hilarious, but he was).

This year’s programme is packed to the gills. Even if we were feeling on top of our game, there’s no way we could hope to go to every panel or event it has to offer. In some ways, this makes it easier to accept that we need to find time each day to catch up on the sleep our bodies are intent on rejecting every night! 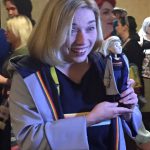 It’s no surprise to see so many Thirteenth Doctors here. From little kids to grandpas, everyone’s raring to celebrate the new incumbent. That doesn’t mean Capaldi is forgotten, not by a long shot. Steven Moffat’s live commentary over his final screen appearance (the Twice Upon a Time Christmas special) is a great opportunity to remind everyone that he combined acting chops with superfan-level knowledge and a special understanding of the great responsibility that comes with the role. Matt Lucas added another layer with his hilarious story about how they used to troll each other by email in the guise of fictional scary uber-fans, stalking each other through motorway service stations and remote fields in Wales. 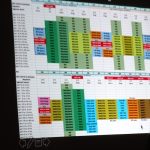 We missed the main Moffat interview, in which he formally apologised for bringing the fez back (too bloody right). Chloe had a kaffeeklatsche with Jenny Colgan and Allan had a wild ride through NASA’s mission spreadsheets in the Mars Rover panel session. He tried to pretend it was the images from the planet’s surface that were so exciting, but it was the spreadsheets. 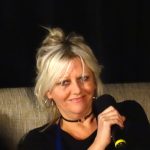 The air turned blue in the ‘This or That’ session with Camille Corduri and Jemma Redgrave. Stones or Beatles? Beatles. Potter or LoTR? Potter (Redgrave is a Hufflepuff). Austen or Brontes? Refused to answer. The highlight was Camille Corduri’s answer to the innocent query ‘cake or pie?’ with the words “filthy pork pie with pickle”, uttered in such lascivious tones that many of those present fainted dead away.