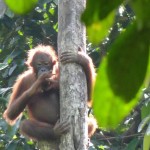 Arrival in Borneo after a 2.5 hour flight from Kuala Lumpur into a harbour city called Sandakan. Strangely, there’s something about the city that looks like Bournemouth and it even has an English tea-house.

The evening in Sandakan was spent in the very pleasant company of Shannon and Neera, two women from Melbourne. We drank, for us on this holiday, a fair few beers and think we outed Shannon as a massive Bette Midler fan (sorry, Shannon) and listened to some great employment lawyer stories from Neera. Only when Allan got the bill did we remember that beer is fairly expensive in Malaysia, definitely not the 50 or 75 cents we paid in Cambodia and nearly a full day’s budget was spent. Well worth it though. 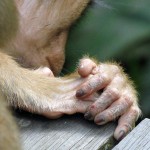 We are now in Sepilok for the next five days. Day one took us to the world famous orangutan sanctuary. We saw two of the orange beasts, one lurked shyly up a tree but the other swung around King Louie-style for a good 20 minutes. It was pretty magical to see them in their semi-wild state. There are only seven organgutans in the 2,500 hectares, but the numbers were made up with a lot of other types of monkey.

Allan marvelled at the nearly human hands of the tiny Long Tailed Macaques. They were all hanging out in big family groups and having a right old time waiting the orangutan food to be distributed, until the alpha male turned up to ruin everyone’s fun. 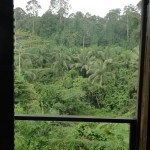 Returning home to our lodge at Paganakan Dii, a true room with a view, we can see and hear the rainforest from our bed by sliding back the wall. And, miraculously, it’s not too loud to sleep.

Curry for dinner, a new episode of Spooks and an early night – it’s like we never left Vauxhall (except for the frogs, the mosquitoes and the flipping great rainforest outside!)