Still somewhat dazed by the scale and complexity of KL, with the help of Uber we head out to explore. The number one pastime seems to be shopping, but that’s concentrated in the mega-malls: cathedrals of glass and marble designed to disorient and induce zombie-like purchasing mania. We studiously avoid these and instead hit a few tourist favourites. All three are free and we were lucky enough to get guided commentary in each.

The KL City Gallery isn’t, to our slight disappointment, an art gallery but an exhibition that celebrates the built environment of Kuala Lumpur. It traces its origins as a river-mouth trading town (the name means ‘muddy waters’) largely built on tin, through its rise to a global hub of commerce, culture and (of course) shopping. The pièce de résistance is a vast cityscape, about 30 metres by 20 metres, which lovingly recreates every major building and landmark in architect-quality models. The place was founded by Andrew Lee, a man who loved architecture but couldn’t afford to qualify so turned his significant skills to creating architects’ models. The Gallery is a celebration of this combination of art and engineering in all its forms, and a love letter to a city that many would see as a modernist dystopia.

Our return visit to the National Mosque was equally full of love for KL, but from a different perspective. The building is modern, functional and oozes serenity. Much like the MI6 building in Vauxhall, it may not be as pretty as other examples but it exudes purpose and that makes it attractive in itself. Volunteers welcome visitors and offer the opportunity to find out about the building, its design, and what happens in different parts, and to ask questions. We found out that the call to prayer is never a competition (which crossed our minds when we stayed in Yogyakarta between three mosques all calling the faithful simultaneously) and that the early morning call includes an extra line – “It’s better to pray than to sleep”! 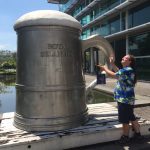 Finally, the Royal Selangor Visitor Centre was a bit of punt. Much as Royal Doulton makes porcelain, Royal Selangor makes pewter. We began with a history of pewter in Malaysia. Made originally of tin and lead (now tin, copper and antimony) it was used for everything from lamps to cutlery. Early money in the region took the form of animals like crocodiles and turtles, with value denoted by weight, and (oh my) money trees. It wasn’t clear whether they were magic money trees, but there were certainly plenty to go round. We also saw the factory floor where all kinds of pewterware is cast, finished, decorated and polished. 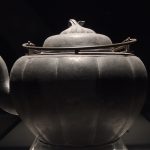 During our visit, we were lucky enough to meet Datin Paduka Chen Mun Kuen, one of the company Directors and great-granddaughter of its founder, Yong Koon. She told us the story of the lucky ‘melon teapot’, which saved the life of a man called Ah Ham when he bent to pick it up out of the rubble of a bombed building during World War Two causing the shrapnel from another bomb to narrowly miss his head. By chance, it was discovered to be a pot originally made by Yong Koon by his granddaughter’s husband, who stopped by for tea with Ah Ham many years later. The original now lives in the museum. It was wonderful to hear the story from a family member, but we were sadly unable to purchase a replica for £500. We made do with a miniature for a tenner.