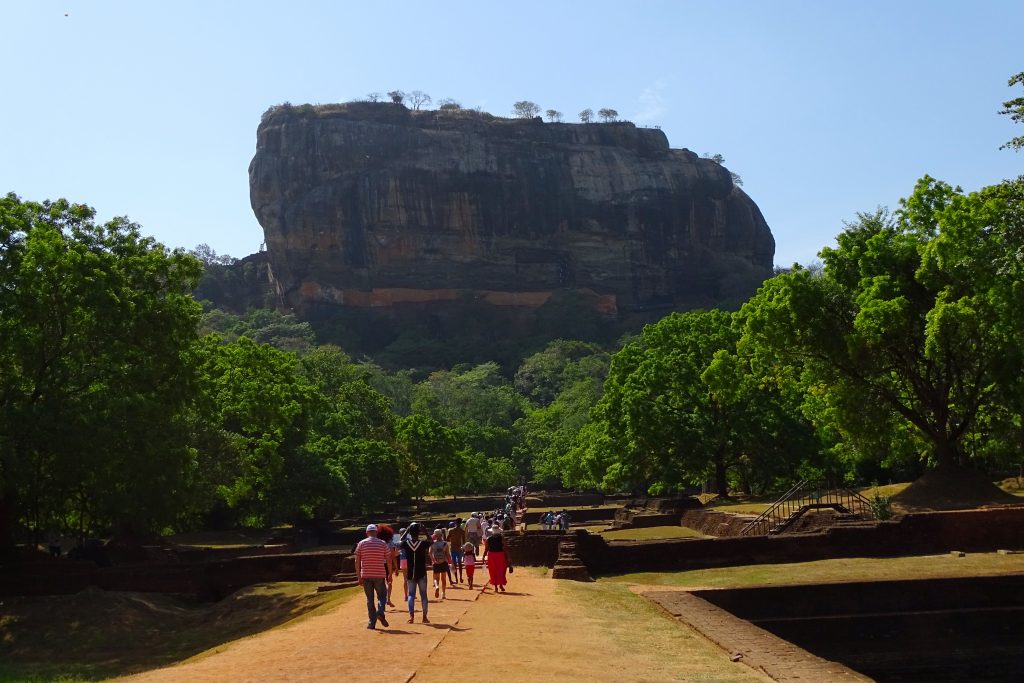 After an aborted attempt due to Allan getting his first cold of this holiday, it was time to try the climb up the 200m high, that’s 1200 steps, Sigiriya (Lion) rock. Yes, that massive thing in the picture above.

These 1200 steps are a mixture of original stone steps, new brick ones, ones that skirt beyond the edge of the rock, ones seem to be just scaffolding and, frankly, fairly terrifying ones that seem to be held in place by just a metal post jammed into the rock. But, lots of people do this climb, so hopefully it’s all safe. Hopefully.

We start at around 8am to avoid the midday heat and are very glad we did. We soon spot a group of Sri Lankan grannies who are starting at the same time as us. In flip-flops. So, the climb can’t be that difficult can it?!  In truth, it’s pretty hard work, especially for us pretty unfit 40-something westerners in constant sunshine and no real resting points between the flights of steps.

We reach three-quarters of the way to the summit at the carved Lion’s Paws and it is at this point we spot signs warning “wasp attack zone” and a whole cage to hold up to 50 people, just in case the black and gold nasties attack. Chloe, partly through tiredness and partly in terror of the final set of steps, says ‘enough is enough’ and decides it is time to head down to ground level.

Allan continues upwards. It is single file up the final set of scaffolding, sorry, steps, so there are no opportunities to stop for the next 25 minutes unless you want to hold up everyone behind. The summit comes as a complete relief, but with truly marvellous views for miles around. Red faced, thirsty and knackered, Allan spends the next half hour looking all around, taking selfies and that will never see the light of day (including a video humming along to Duran Duran) and sports a grin as wide as the Tyne. However, the sense of achievement is only tempered by spotting our flip-flop wearing Sri Lankan grannies, who managed to get to the summit somewhat earlier than your correspondent.

Finally, it is time to brave the journey down. The same steps seem slightly less terrifying and finally reach the bottom where there are gardens, old ruins, a wide moat with the clearest water we have seen in the whole country and flowering beautiful water lilies. The only thing spoiling this whole idyllic area are signs saying “do not swim, crocodiles in the water”.

It was difficult, it was expensive and legs are now aching. But it was so worth doing.