Event number 9 and first day of the Athletics brings the first visit to the main Olympic park.

Arrived at the Olympic park via the very quick and smooth Javelin train, the stadium standing there like some massive alien spaceship. The Olympic park is a huge affair with lots of people going in all different directions although big enough walkways so not causing too much of a problem. It’s also remarkably easy to get away from the crowds and sit beside one of the canals. Just don’t try to get something to eat or buy beer, the queues before the start were worse than the worst post office queue you have ever seen.

Anyhow, onto the main event. The stadium and seats were majestic. To quote Helen, close enough to the Olympic flame to regret not bringing marshmallows to toast – we could feel the heat from it. We saw Jess Ennis and all (including a NZ lass called Cowley) in the Heptathlon shot put and 200m,  the women’s 100m first round, women’s discus qualifying, men’s 1500m qualifying,  Men’s shot put and the Women’s 10,000m final. There was the men’s long jump qualifying, but we were the other side of the stadium and really didn’t have a clue on that one.

Highlights were just being at the stadium, Jess’s storming run in the 200m, seeing all the 100m contenders take a bow, Polska winning the men’s shot put and the amazing sprint with 300m left for Ethiopian Tirunesh Dibaba to retain her 10,000m Olympic title that left everyone else over 30m behind at the end. Below are some photos of the evening – click each one to bring up a full size version. 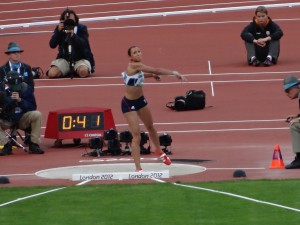 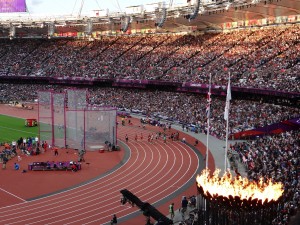 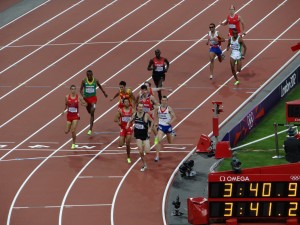 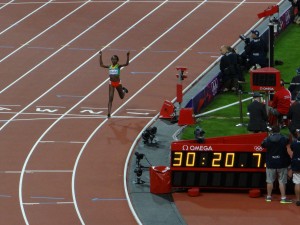