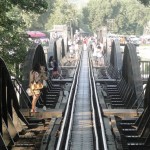 The appropriately named Death Railway was built in WW2 by Allied prisoners of war and SE Asian slave labour. It is estimated that over 17,000 PoWs and over 100,000 slave labourers from Thailand, Burma, Indonesia and Malaysia died building this railway.

The Japanese intended to join Bangkok in Thailand with Rangoon in Burma. We took the 2 hour train journey from Kananchaburi to beyond Nam Tok to the end of the line right next to a lovely waterfall. 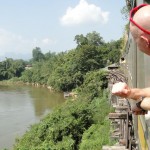 It really is an amazing journey although the history of the construction was always in our minds as the train passed over the famous Bridge over the River Kwai, clackery clacking through massive banana plantations, squeezing through the smallest cuttings in sheer rock faces and going over viaducts that almost defied belief. Truly spectacular but at such a cost over 60 years ago.

As this was a specific tourist train coming from Bangkok, we expected lots of hot, sweaty westerners. To our pleasant surprise, it seemed like a lot of 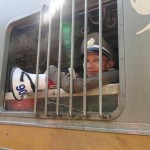 Thai people were on the train. Fantastic entertainment from the trainguard telling people through a mega phone what was coming up on the line. Everything from a field of yellow flowers, stone sheep and the main views were greeted with ooo’s and ahhh’s, with our train guard saying “beautiful” and pointing for our benefit. A round of applause at the end of the performance was made for surely Thailand Train’s employee of the year.