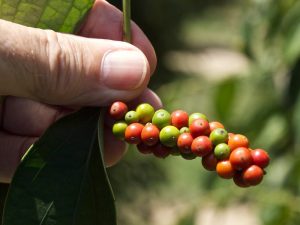 Kampot was pretty famous around the world, especially for foodies & chefs for one thing. Pepper. It used to be a “must have” on every good French restaurant menu. But then, as briefly documented in our previous time here, the absolute devastation of this entire country by the Khmer Rouge happened whilst the world just watched and didn’t do anything to prevent the genocide.

In the past 10-15 years, Kampot has attempted to gain back its rightful place as the “champagne of pepper” from India and Madagascar. There has been foreign, mainly French and Belgian, investment in new plantations. Kampot pepper has also gained a Geographic Indication mark and, although production is still reasonably small scale of around 70 tonnes per year, demand and production are growing. 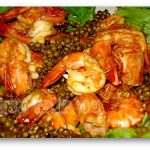 We bought some Kampot pepper last time we were around this area and it is indeed pretty special. It tastes a lot stronger than your average supermarket pepper, but with an actual taste of something and not just hot. It is also used extensively in cooking around here, our hotel uses substantially amount of pepper in 8 meals and down the road in Kep, the speciality is Prawn or Crab with Kampot pepper.

We chose to visit a plantation called “Le Plantation” as it sells itself as ethically sound and pays workers well, built and pays running costs for a local school, building a new road and other such good stuff. It obviously doesn’t sell itself in the “Original name for a pepper plantation” competition. 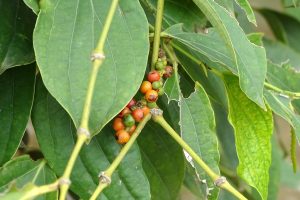 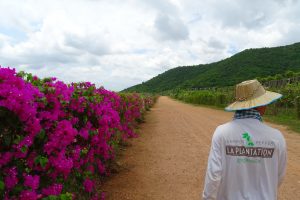 The visit to Le Plantation was slightly disappointing as we’d just missed harvest season, but still was interesting enough. There were only odd peppers on the huge amount of vines. We did however find out there are 3 types of peppercorn made (black, red and white) but there was also other types such as long pepper. We also get educated to know that white pepper corns are actually red pepper corns without their husk.

Le Plantation also farms turmeric, salt and other goodies. Their shop was popular and we obviously bought a reasonably big vacuum-packed bag that will hopefully last the next four months travel.

All was left to do was to have the special of the day back at our lovely hotel. Aged Australian melt-in-the-mouth tenderloin steak, perfectly cooked that matched the best steak we have ever eaten, even compared South America’s finest. And it came with a choice of lime & pepper or creamy pepper sauce – obviously.