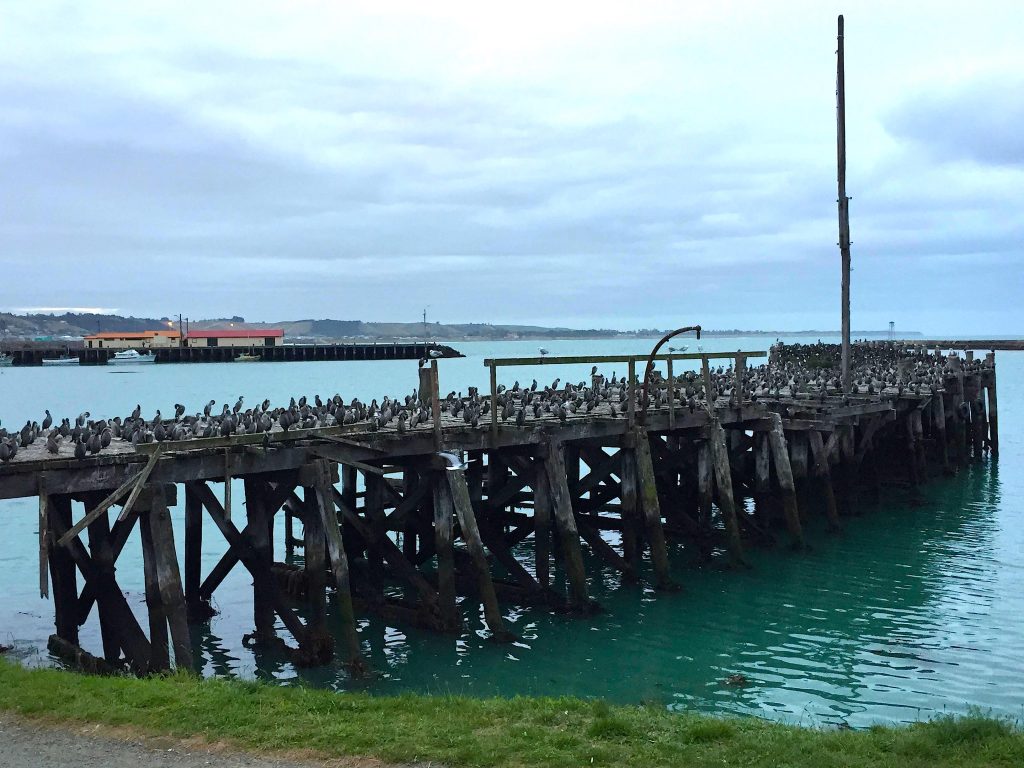 And so on to Oamaru, the New Zealand home of penguins and steampunk. Quite a reputation for a small place to live up to.

As our bus strains and splutters into town, we’re struck by the human-scale of the place. It feels odd to UK-dwellers, though US friends will be more familiar with the phenomenon, but most of New Zealand’s urban settlements, even those established when the main form of transport was the horse, are designed for cars. Not for them high-density living, no, why would you need a local shop when you can drive to the supermarket? Everything is stretched and, on foot, just a little bit too far.

So, Oamaru actually felt like a relief. Normal sized roads, shops clustered around a centre and things you can actually walk to. Joy!

We’d been let down by our original accommodation so were a little worried what the ‘offered alternative’ might be like. A short walk from the bus stop brought us to the front of…a charming little cottage nestled in an English country garden. When we opened the door, a perfectly realised Victorian interior awaited us. Polished floorboards, flowered carpets and patterned wallpapers, iron range and fireplaces and, everywhere, little era-appropriate knickknacks, including a wonderful 3-D stereoscope complete with one saucy picture in which you can see a lady’s legs! Miss Barclay’s Cottage is the place to stay in Oamaru.

We only have a couple of days here, and the weather has turned for the worse, so we decide that whatever happens we must see the blue penguins and Steampunk HQ.

So on our first evening we made our way to the far end of the harbour and the Blue Penguin Colony. Even on this short walk, we were the only pedestrians, and were keeping our fingers crossed for some street lighting for the journey home. On the way, we passed the end of a long pier, where a handful of seagulls squabbled over some fishy treasure. Lifting our eyes, we noticed a lot of cormorants sitting on the pier. And some more. And…ohmygodtheentirepieriscoveredincormarants! Hundreds of them seemed to cover every available inch of space, and they sat in silence. Spooky.

The Blue Penguin Colony itself is a well managed space. A visitor centre welcomes humans and then keeps them near, but carefully separated from, the wild blue penguins that use it as their home. They are tiny, about knee-high and, science tells us, also the cutest penguins in the world.*

As the sun starts to set, we take our seats at the edge of the water to await the arrival of the penguins. Luckily, we are not forced to listen to the crash of the waves or wonder at the gentle mystery of the ocean shore. Instead we get a long voiceover intro, in both English and Chinese, while children (who have an excuse) and adults (who don’t) ignore the requests of guides to stay seated, don’t make sudden moves and turn off electronic devices. Idiotholes.

We also see the cormorants, who must have been waiting for sunset, fly past in groups of a dozen or so. They follow the shore in a lazy line. It takes some time for that pier to gradually empty past us.

However, the first raft of penguins arrives and we are all united in wonder as they waddle out of the waves, pause carefully at the bottom of the rocks and then jump, wiggle and hop their way towards their nests. While we appreciate the dangers of anthropomorphism, in this case it’s impossible not to indulge because our brains have shut down and are just screaming ‘so cute!’ and ‘really funny!’

We got fairly lucky for this time of year, observing about 60 penguins arriving in four rafts over the course of an hour and a half.

Wandering homeward (yes, there were some streetlights) we encounter a deserted town centre. It’s just gone 9.30 and even the pubs are closing. I guess Oamaru still has a lot in common with the rest of New Zealand after all.

*This sentence was carefully crafted to irritate Allan to distraction. Job done.