We arrived last night in hot and humid Malaysia after a slightly bumpy (Allan) or about to plunge horribly into the ocean (Chloe) flight from Phnom Penh. With only one full day before our next flight, we embarked on a trip to two of the biggest towers in the world, both handily only a short journey away from our cheap and good hotel. 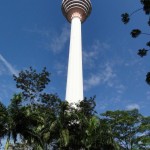 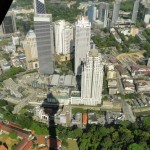 First was the KL Tower (bet it took them ages to think of that name) at a very impressive 421m high – although the observation floor was only 276m high, which still seemed almost in the clouds to us. A clear morning allowed perfect 360 degree viewing of the urban sprawl and surrounding countryside. Fantastic views only spoilt by the sad “zoo” at the bottom which was mainly big snakes in very small cages.

Next up, a stop at the very well recommended Zanmai Sushi restaurant to get that raw salmon craving sorted that Chloe has been suffering for the past five months. We ate enough to fill an aquarium, came to a bargain £14 and needed a lie down to allow full digestion. 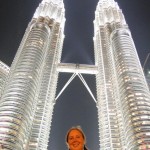 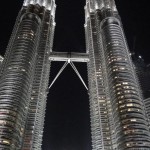 After a little retail therapy to replace some hand baggage that managed to get mashed on Air Asia, we reached the Patronas Towers at a whopping 452m. We didn’t get to the viewing platform but consoled ourselves with taking some good snaps of the towers from outside. Simply the most spectacular modern building we’d seen on this holiday and well worth the visit.

So, a day in a big city finishes. Quite a contrast from Cambodia. Next stop, Borneo.