Having a more awkward than expected journey to Windsor due to South West trains cancelling all special Olympic services to Windsor, we proceeded to Eton Dorney Lake. Hardcow could say all sorts of things about this location, but let’s leave it at; there is no wonder that the privilaged few who can afford to go to Eton public school provide good rowers with an 2km long, Olympic standard, man-made 2km boating lake as part of their sports facilities.

Onto the sport and we had front row, although pretty crampt, tickets for all sorts of canoe and kayak qualifiers and semi-finals. There wasn’t too much competition in the qualifiers as the first 5 racers got through to the semi-finals and often there was only 5 racers. Semi-finals were a little more exciting especially the C2 (Canoe 2 person) race which seemed like a dead heat between around 4 countries. Team GB had an unassuming day with a couple of knockouts in the semi-finals and one guy qualifying for the final.

Not the best sport to watch live, can’t really see the race until it’s around 200m away, but we admire the strength of getting a boat to move so quickly, another new sport watched and somehow we managed to get a suntan even though it wasn’t sunny. Ra Ra Ra indeed. 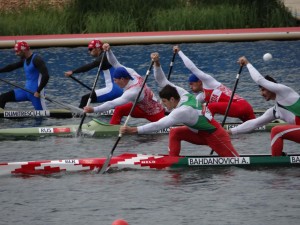 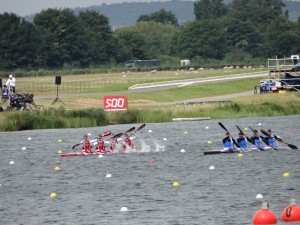 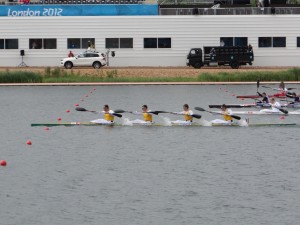