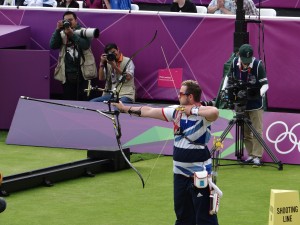 Finally, after a week of envying Allan’s Olympic excursions, Chloe made it to her first event – the men’s individual archery, at which the 16 best shooters of the tournament will be whittled down to the final 8. As a bonus, the archery is held at Lord’s Cricket Ground, which contains one of her must-see structures – the media centre, a giant, white clock radio contrasting with the Victorian architecture of the pavilions.

The eight pairs of archers in a knockout set of matches include world champions, European champions and surprise newcomers. So long as the rain holds off it promises to be a glorious morning of sport.

First up, Larry Godfrey of Team GB was up against Khairul Anuar of Malaysia. On the way in, we were encouraged to roar for Larry the Lion, which struck me as a risky marketing strategy since another famous Larry was a lamb. Despite an incredibly close match, which ended with a dramatic tie-breaking shoot-off, Larry’s Olympic journey ended there . While we’re alliterating, let’s just call him Larry the Local Boy and leave it at that. He certainly got a big cheer from the leaving crowds as he posed for photos with fans outside the pavilion. 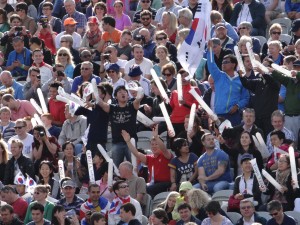 According to Allan, there’s only one rule in archery – don’t bet against the South Koreans. So it was a surprise when, in the second match, it was the European champion from the Netherlands who won. He later admitted that it was the first time he’d ever beaten a Korean in a senior competition.

The final match was another South Korean, the world number two Kim Bubmin, against a 15 year-old from Moldova. Although the game went as the bookies predicted, wee Dan Olaru was very self-possessed and scored respectably. Since archers can compete for many years, it’s not beyond the realms of possibility that he’ll be at the 2048 Olympics.

There were contingents there from all the nations competing, though in true Olympic spirit everyone was clapped and cheered. But who were the best fans? Honourable mentions for the Dutch, French and Ukranian fans, but it was the South Koreans who nailed it by a country mile – flag waving, clapping with special blow up thingies, shouting, cheering. Next time we watch some archery, we’ll be learning Korean for ‘go on, my son!’