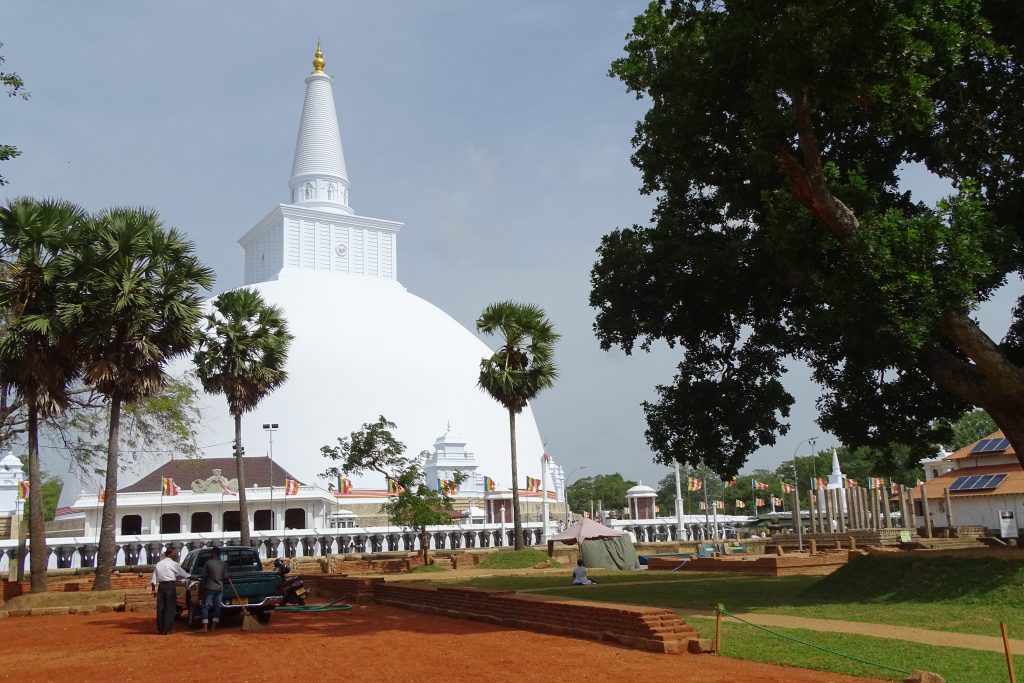 We arrive in Anuradhapura after a five hour “first class” train ride from Colombo. And, yep, someone tried to scam us before we’d even left the station. Seriously, if your scam is in all the guidebooks, it’s not a very good scam (we’re looking at you ‘helpful’ man soliciting donations to the Deaf School).

Our hotel is basic and frankly odd. The room is a good size and has a balcony, but they’ve squeezed in two double beds that take up all of the floor space. There is nowhere to hang or store clothes and a much-needed laundry service is available but they “do not wash undergarments”.

Sri Lanka is pretty challenging after the very easy tourist places of Malaysia and we feel like a walking ATM at times, but we do discover a gem. A café near us (Harvest) only opened a couple of months ago and does great food including the best biriyani this side of Colombo. We talk with the owner/chef and she mentions that her husband is a tuk-tuk driver. For once there was no pressure and because of this, we book him in for a morning tour.

Anuradhapura was the ancient capital of Sri Lanka for over a thousand years from 377BC. Over that time, the area became dotted with temples (the great domed stupas), tanks (artificial lakes supplying water to local people and their land) and palaces. It was abandoned following an invasion in 993AD and the jungle took over for centuries.

Our first stop was to see the sacred fig tree, allegedly the most ancient tree in the world at over 2,000 years old, said to be grown from a branch of the tree under which Buddha attained enlightenment. Supported by ornately decorated golden props, it towers over a courtyard around which pilgrims make offerings, pray and meditate. It’s still a very active place of worship, with hundreds of Sri Lankans there on any given day. As a sacred site, it was shoes and hats off, but it also turns out that pilgrims wear white. We stood out a mile in black, but people were pretty tolerant of stupid tourists who don’t know the most basic things.

Moving on, watched by families of monkeys who lounged in the low trees and grabbed anything that looked remotely like food (I don’t think many fruit-based offerings make it to the temples), we walked towards the Ruvanvelisaya Dagoba. By no means the largest, this impressive stupa is 55m high and surrounded by friezes of hundreds of elephants. Like most of the sites here, it is still very active, hundreds of people came and went just while we were there. It is painted a dazzling white and girdled with a huge belt of coloured cloth.

We found a more tranquil atmosphere in a smaller stupa nearby, surrounded by shady trees and almost empty. By now the sun was out in earnest, our heads and feet really starting to feel it. By the time we reached, Isurumuniya Vihara, the pavements and sand were burning hot and Chloe was eyeing Allan’s socks enviously. Sadly, that was why she chose to explore the museum area (dwarves and apsara very popular motifs in 7th century rock carving, by the way) while Allan climbed to the top of the rock into which the temple was built for the view over the jungle. Given that you can see just a handful of the many sites from up there, you can get a feeling for just how vast the city-complex was.

Our final stop may remain a mystery, as we don’t know its name. Our driver told us it was a ‘place of meditation’ but as we climbed the hill surrounded by a deep trench and vast rocks seemingly dropped out of nowhere, we could only think it was a hill fort.

We finally enjoyed a day in Sri Lanka, only slightly dampened by Chloe’s touch of sunstroke after hours without a hat. Luckily, she recovered enough to partake of Harvest’s magnificent mushroom biriyani that night.