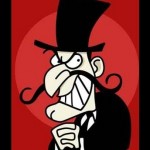 On Thursday 7 July, trains out of Waterloo at the height of rush hour were packed. Not the usual packed, but cattle-crate, sardine-tin packed, because a big city bank was holding its ‘corporate challenge’ in Battersea Park. Clearly, patience would be an extra special virtue tonight.

I had walked passed at least six carriages before finding one which had some space down the aisles, deep in the middle of the seating area – not desirable commuter territory. Everyone knows that, if you have to stand, better it were near the doors. They offer the opportunity to gulp cool air and find protection on at least one side. (I wonder whether these are survival traits in train users and, in a thousand or so generations, whether we will see a new breed of tiny, cuboid commuter able to fit into any corner?)

In order to get onto the train, I would have to throw myself on the mercies of my fellow travellers and ask them to move down. Although I am no stranger to shouting ‘there are seats upstairs!’ on buses, I had never before attempted to communicate with the Waterloo Commuter. However, the hundreds of people in shorts, revving up for the display of corporate loyalty ahead, lent a certain carnival air to the platform and I was bouyed up by their exuberance.

‘Excuse me?’, I started strongly, ‘is there any chance that people could move down a little bit?’ One or two near the door caught my eye and shrugged apologetically, but before I could repeat myself a little louder to the bankers further inside, the gentleman in his early 60s, immaculately groomed and clutching a large briefcase to his chest, scowled directly down at me and growled ‘Nothing to do with me. It’s not my problem’.

It was the tone, as well as the words, which brought me up short. ‘Excuse me? Did you say…’, ‘Not…my…problem’, he lashed. You could almost feel the little wave of deflation wash through his immediate vicinity, like a flash fire through dry straw, leaving a layer of emotional ash on the people around him.

Now, he may genuinely have been having the worst day ever. Perhaps he had just made 100 people redundant and could barely look at himself in the mirror of the executive washroom. However, I think not (I certainly hope not).

He was the epitome of David Cameron’s Big Society. A suburban-dwelling, high salary, middle-aged, white man, he believes wholeheartedly in volunteerism, self-help and reducing state dependency. This is because if he finds himself in need of assistance to care for a frail relative, remove graffiti, educate his grandchildren or recover from a serious illness, he has his own resources to fall back on.

For him, the Big Society doesn’t mean considering what he can do to help other people – in big ways and small ways – it means paying as little tax as possible. He moves through the world, spreading low-grade, nasty, ill-will when reality does not effortlessly shape itself around him and his desires.

That’s a lot to extrapolate from a short exchange on a platform at Waterloo. But evil does not arrive on a cloud of flame, it sneaks into our lives in little ways that politeness makes it hard to challenge.

Actually, I don’t believe in Evil any more than I believe in Goodness. But I do believe that we have a collective power we rarely acknowledge. That of making the world bearable, even pleasant, through little acts of kindness.

So I don’t think it’s hopelessly idealistic to suggest that next time you’re on a packed train, stuck in a long queue or pushing through the crowds to make it home, you resist the very London temptation to lash out at the people you encounter. The only thing you can guarantee is that many more people will have a day a little bit sadder because of you. On the other hand, a small act of kindness goes a very long way.