Less than an hour journey and we arrive in town of Hokitika. There’s nothing much here and it’s even quieter and smaller than Greymouth. Well, we should say that it’s even quieter for 364 days of the year, except for one day when the population doubles to 8,000 for the Wild Food festival. We bought tickets months ago and were really looking forward to going.

It’s not called the Wild Food festival for nothing. Vegetarians, you may want to look away now… 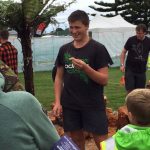 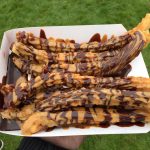 A whole showcase of foods including seagull eggs, mountain oysters (goats testicles), huhu grubs (big fat maggots) extracted from freshly-cut wood. Would sir like to eat the huhu alive or fried?. There was deer seamen on toast, pigs snouts and fish eye jelly. There were plenty of takers for all of these delights, especially the huhu grubs.

There was also plenty for the less adventurous like us. We had bacon & avocado sarnies, mixed meat kebabs, veggie Nepalese dumplings, Spanish churros. Only a purchase of a pig’s ear counts as anything near wild and frankly, it wasn’t that good, one could almost say that the chef made a … (censored due to bad joke alert) 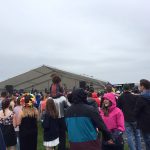 A main stage was available for musical delights. Starting with the Hokitika country music society showcasing their best, the NZ army band then played some classics and then our favourite of the day, Smashbox, getting the crowd dancing with covers and originals – see here for a flavour. The headliners of the day, Salmonella Dub went down really well (ironically, considering their name), but we only heard them from our hotel room as we’d retreated from the rain at that point. 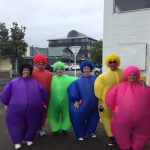 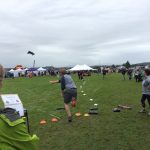 Yes, it rained, but it didn’t seem to spoil all the paying public’s enjoyment of the day with many deciding on fancy dress – we loved the Tellytubbies and they kindly posed for a photo for us.

Later on in the evening, there were some very very drunk people around town. We spotted a few sorry souls who could barely stand up or communicate in a coherent way that reminded us of the Bigg market on a Friday night. But, it was all very good natured and didn’t see any trouble.

The next morning, there was no rubbish on the street or any evidence that there had massive party the night before. The only clue was the many severely hungover people frequenting the early morning cafés. By the evening, the village was totally quiet.

It does seem like the Hokitika locals have a real love-hate relationship with the festival. Hating the fact that it changes their entire town, but loving the extra income it brings.

The Wild Food festival brought us to a small village on the west coast for 3 nights and we loved it, so if you’re around NZ in March one year, you know where to go!

Now, how do we start a petition to get Smashbox to headline Glastonbury?