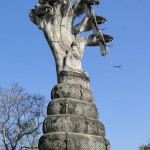 Up early this morning to visit the Sala Kaew Ku sculpture park, just outside Nong Khai. Built by Luang Pu Bunleua Sulilat to express his Hindu-Bhuddist vision, it contains dozens of enormous concrete depictions of gods, Buddhas, myths and people.

It’s somewhere between a park, a temple and a playground. There were plenty of Thai people visiting while we were there, including some monks, but it was hard to tell whether their motivation was spiritual or they were there for the spectacle. 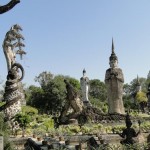 Finding a forest of bizarre statues in such ordinary surroundings is part of the delight. The seven headed naga (a snake-like creature) rises 25 metres above the surrounding village, its ornate carved tongues sinuously licking the air. Meanwhile, you can literally walk the circle of life around a path of statues, entering through a narrow tunnel (can you see where he’s going with this?) and moving through childhood, work, love, family and, finally, death, after which you exit through the tunnel again into the realm of the gods.

He actually started a similar sculpture park on the other side of the Mekong in Laos in the fifties, but fled the revolution in 1975 and started a bigger, better, badder creation in his new Thai home.

Click on the photos to see the full image. 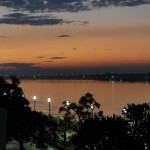 Dear readers. We tried our hardest, but Laos finally beat us. Coming to the capital, Vientiane, a little earlier than expected due to our previous illnesses messed up our provisional schedule. This rescheduling, coupled with the fact that Laos is very tricky to get around (either it’s an expensive flight or 11 hour intercity bus journey), meant that we were left with a choice of 2 weeks in the capital or hopping off to somewhere nearby.

Nong Khai in northern Thailand was our chosen destination. Only 1.5 hours away from Vientiane, hotel overlooking the mighty Mekong (the border of Laos/Thailand) and with a well known Vietnamese restaurant to boot. There’s nothing much to do here except just watch sunsets, eat excellent Thai/Vietnamese or German food and catch up on our reading, so don’t expect amazing photos or posts in the next few days. Attached is the view of the mighty Mekong from our balcony.

Special mention to the hotel we are staying at. Travelfish website summed it up by saying that it is comfortable and clean but with “chronically confused staff”. They seem not to understand the concept of booking rooms in advance, but are lovely with it. This morning we asked whether we were leaving today (on only day 2 of 6 booked) but were also were offered sticky rice fritters, sweet and sour rice and tasty local sausages for breakfast. All freshly BBQed by the edge of the river at sunrise, unexpected, totally free and very tasty. 700B will hopefully, possibly and maybe get you a nice clean river view room with balcony at  Baan Mae Rim Nam, 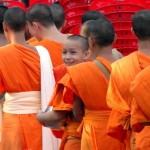 Apologies to those of you expecting us to be on the ball enough to actually install a picture gallery on this site.

Two months later and we’ve finally managed it. You can click on the ‘Photos’ link in the main menus (above or left).

Or if that’s still too much effort, click here.

What do you do when you want to dye your hair dark purple but don’t want to turn your guest house bathroom bright pink? You seek out the friendly local hairdresser and persuade her to use your hair dye, lugged all the way from London, to colour your hair.

Tu’Jean hair and beauty salon was right on my doorstep and were willing to help. They insisted on putting the TV to an English channel for me. I was happy to watch the Thai version of ‘Kids Do The Funniest Things’ but ended up watching a John Hurt horror film about a possessed house in Mississipi. Luckily it was still daylight.

So if you’re in Chiang Mai and need a hair do, manicure or facial, Tu’Jean is just a few minutes walk from Tha Pae Gate and they’ll treat you like a queen for a very reasonable price! 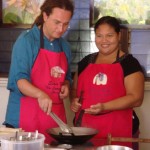 Saturday saw Chloe and Allan pull on their aprons for a day of Thai cookery. We learned about traditional Thai ingredients like galangal and ginseng (‘make man very strong!’), the basis of several curries, from red to panang, and tried our hand at vegetable carving.

Allan’s approach to the vegetable carving was much like Chloe’s attitude to computer games (‘Ooh let me try, oh it’s difficult, what’s the point of this?, don’t want to do this any more…’).

The day was lead by Nancy and her team, who were great teachers, unfailingly cheerful and knew their food. We fried, crushed, boiled, chopped and, ultimately, ate until we could do no more. At that point we were driven home clutching bags of curry, soup  and rice for our dinners.

To put the icing on the cake, the Siam Rice team were kind enough to drop Chloe’s camera back to our guest house after she left it in the kitchen – so a big thank you to them!

It was an eagerly awaited clash.

Heavyweights on both sides.

Happens only once in a while (well, actually, every day) 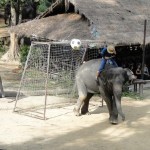 The match started with only one goal on the pitch, breaking of FIFA rules I’m sure, but no-one chose to argue with the “big lad” (3 1/2 tonne) up front for the attacking team. Quite extraordinary. Straight away, the attacking team went, well, on the attack, and with some amazing trunk work, controlled the ball well enough to shoot. With a foot like a traction engine, he shoots, the keeper dives, but it hits the bar. 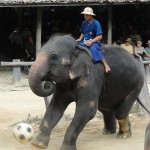 Back on the attack, ignoring the abuse from his team-mates – this player must have thick skin – he tries his luck again again. However, the player is thwarted by needing to stop for a long toilet break ON THE PITCH. Is the hallowed turf not sacred?!

Showing great pace and definitely faster than Kevin Nolan and crikey, the elephant hits it like Shearer’s freekick against Leicester in 1997. It sails towards the goal and IT’S IN THE BACK OF THE NET. Remarkable.

The rest of the match was a daze…fantastic footwork…great skills…mmm…isn’t it… Final Score, who knows, but football was the winner.

P.S. Mike, I will do you a proper game later in the holiday. 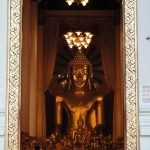 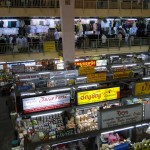 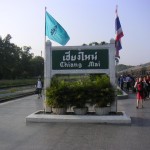 Overnight sleeper train from Bangkok in 1st class. Although do, dear reader, take any visions of Orient Express, gourmet food and butler service away from your imagination. Instead, just think rip-off prices for the worst food we’ve had on the holiday so far, a maximum speed of 30mph, slightly grubby windows, squeaky bunk-beds and German backpackers playing Fat Boy Slim loudly at 7am.

However, scenery from dawn onwards was good, the train was only 2 hours late (making 16hr train ride in total) and did manage to get us out of Bangkok into the more chilled out Chiang Mai with its cookery courses, elephants, markets and hill trekking. 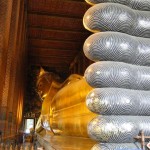 One night in Bangkok and certainly Allan is now very humble.

We both went back to the place we went to straight after our wedding last week, which was to Wat Pho, which hosts the amazing reclining 46m long, 15m high, Buddha. You can find God in every golden cloister, felt an angel sliding up to me although did feel the devil walking next to me.

Bangkok is really a mixture of despair and ecstasy. It’s a crowded, polluted and stinking town. Thought London in rush hour was bad but Bangkok is unbelievable, the drone of traffic is traffic constant. However, food was cheap, hotels we stayed in were good and the sights were pretty spectacular.

(With thanks to Murray Head and the lads from Abba) 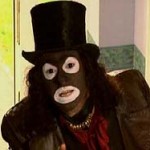 Thanks again to everyone for their kind words of love, support, sarcasm and frank surprise about our Bangkok wedding. We wouldn’t have it any other way.

Allan has started channelling Papa Lazarou, which is both funny and disturbing…